COMIX: Beyond The Comic Book Pages is an exciting documentary about the world of comic books and the comic phenomenon, told through the thoughts and images of creators, writers, artists, publishers, comic book store owners, collectors, and most especially, the fans, who have made this phenomenon what it is today.

COMIX also delves into the world of independent publishers, like Top Cow Productions (Tomb Raider, Hunter Killer, The Darkness, and Witchblade), comic book store owners, as well as comic book conventions like Comic-Con, Wonder Con, Anime Expo, and Wizard World to document the fans of this phenomenon, with many fans in full costumes and some talking about how they made them (that’s for you cos play fans!).  We are so proud of the film and the caliber of people in it!

“My vision for COMIX started as an idea about how to make a comic book and blossomed into a full-length feature documentary about the comic book phenomenon. COMIX is my way of sharing the artistry that I love through a movie that was made by a fan, for fans,” says creator Michael Valentine.  “It has been amazing working on this film and the great people I have met along the way. I think comic book fans as well as anyone else who watches it will find it fun, informative, and inspirational.” 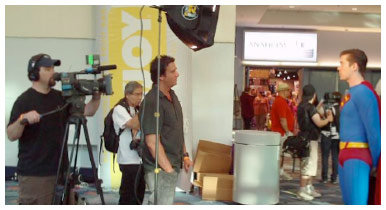 COMIX is the brainchild of Film Maker/Musician Michael Valentine, a long time comic book fan. Michael’s creativity started at age 6 when all he wanted to do was draw John Romita Sr’s Spiderman and Neal Adams’ Batman which were some of his favorite comic books. Later, he got into other Marvel and DC titles like Captain America and Superman. At age 10, his life changed when he saw KISS for the first time. They were larger than life, the ultimate rock star superheroes. They even had a comic book. Michael never stopped loving comics. About 10 years ago, he came up with the idea of documenting the process of creating a comic book that blossomed into what COMIX: Beyond The Comic Pages has become.